Many years ago, in a time of sunshine and flowers, there lived a young girl. She had been brought up in a well to do house, with everything she wanted, the best food, the best drink, the nicest clothes, and yet..somehow her life was not happy.
There was an unfulfilled longing within her that she could not reach. She searched all her pockets, but found nothing, she looked through all her drawers, and into her cupboards, she checked the roof spaces… Continue

"Scary Stories are good for your children," says host of the Art of Storytelling Show.

Eric James Wolf, professional storyteller and host of the Art of Storytelling Show, is available for print, radio and television interviews to speak on how scary stories can be used to teach important life skills to children.

It's a fairly straightforward thing to tell a story. You open your mouth, and if you're not tongue-tied, out it comes in one way or another.

However, it's quite a different thing to cycle across Continental America on a flimsy looking contraption that in a Mary Poppins film would take off in a good breeze, and still tell stories. Especially when you're filled with so much novel imagery of America, having expended so many BTU's.

So, Layne, congratulations on your Crazy Guy… Continue

For those of you who enjoyed Robert Zemeckis’ Beowulf, a rollicking good film adaptation of the old English poem––I certainly did (I watched it twice)––my 1-hour storyteller’s version of Beowulf may surprise you. Firstly, Ms. Jolie is much prettier than I am, but then again, I’m a man, and the “Grendel’s Mother” that screams from the fens in my version of the story isn’t pretty anyway, or supposed to be.

Quite the opposite, in fact. Like Grendel himself, she’s much… Continue

Your Storytelling Marketing: Oyster and Egg

If you are going to succeed in marketing, then you need to know the difference between oysters and eggs.

Do you know this Aesop fable?

"Once a dog was walking along a beach, daydreaming of eggs, his favorite food. As he walked along, he caught site of a small oyster and assumed that this round item, too, was an egg. He gobbled it up. Later that night, as he was troubled by stomach pain, he thought, "I deserve this pain for thinking that every round thing is an… Continue

Who else wants to know how create a working income as a storyteller?

Next week, we launch the our MasterMind Group (number two). I have room for two more people.

Invest in yourself. You are worth it. Your art is worth it.

If you want to know more, then send me an Email to sean@storyteller.net and include the words "mastermind group" in the subject line. I will send you all the long, complete details, costs, references, and so forth.

Email me now so… Continue Long ago, in the time before time itself, a large round rock lay in the middle of a forest. The rock was huge, its surface was smooth, and when the rain fell on its top, it rang like a deep bell.

Growing all around this rock was a myriad of flowers, all colours, all shapes, all sizes. A carpet of colour fit for a queen.

Each time the rain fell and the rock sang, more and more flowers grew around it.

Will be doing Ghost Tales for a Local Historic Site

I am looking forward to this! A well known landmark home is doing a fundraiser and will be offering storytelling and a candlelight tour for the season.

The lovely Overholser Mansion in OKC (http://www.overholsermansion.org/) will be the setting. It will start in the Carriage House and go through the house. Four story sessions over a two evening period.

HEAINTRIGHT.WEBS.COM FINDS ANOTHER NEW PLACE FOR TELLERS TO TELL

This summer I found a new, unique place to tell. A documentary company here in VA was doing a documentary on the many late nite horror movie hosts we have had here in VA. They came up with an excellent title: VIRGINIA CREEPERS. They advertised they were looking for folks with "STORIES"!!! As fate would have it, I do have a personal story about meeting one of these guys, THE BOWMAN BODY, perhaps VA's most endeared horror movie host. Important note: I did not make the final cut, my story was too… Continue

Mother Goose on the Loose

Mother Goose has travelled to Michigan, from Chicago to Oklahoma City in search of Route 66 stories;
Abilene,Texas for the Tumbleweed Storytelling Festival;
Albuquerque, Memphis, and home again.
Just in time for the National Storytelling Festival in Jonesborough. As a dedicated listener, I heard great stories, and was amazed to hear Ted Hicks telling his father's stories.

I finally had time to write about the amazing festival in ROME! Check it out on my blog here.
Best,
Csenge 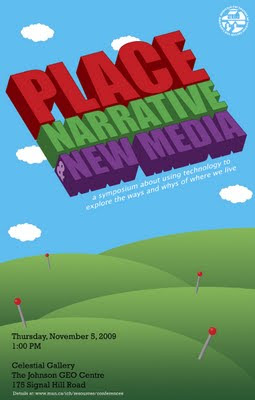 On Thursday, November 5th, 2009, the Heritage Foundation of Newfoundland and Labrador’s Intangible Cultural Heritage program, as part of the annual St. John’s Storytelling Festival, is organizing a half-day symposium on how new technologies are being incorporated into storytelling. Several invited speakers will detail how they are using new media or technology… Continue

This week I begin my work as a traveling school assembly presenter. Sure, I’ve been telling in schools for a while now, but that was always in a short distance from my house (an hour or so) or from a family members house. This time I’m going to be traveling, on one trip for over 14 hours by car. This week I will travel from Downey, Idaho to Derby Montana with 4 show at 4 school in 2 days. I’ve packed my bag of stories with everything from Aesop to Poe, from howling coyotes to Abraham Lincoln.… Continue

DaddyTeller™: Be a Hero to Your Kids and Teach Them What's Really Important by Telling Them One Simple Story at a Time.

The Ebook will be available on 10/7/2009! Sign up now for our updates on the
DaddyTeller™ site to get your discount code for the launch day!

You are about to become a hero.

It’s time for you to… Continue

If you need to finally, really, build your storytelling career, this is for you.

<>What Others Say:
"Investing in the Mastermind Group was a smart move and worth every penny. New ideas, a better way of planning and focusing my marketing, and accountability to a knowledgeable and supportive mentor on goals I set myself - all set my storytelling business on a new and more profitable path. I highly recommend working with Sean Buvala. Go for it."- Ellouise Schoettler,… Continue

As Ships At Sea

As Ships At Sea

Raising children is a precarious business. I have found great challenges in the everyday and amazement in their far reaching capacity. Always teetering the scales of life, whirlwinds come to batter and we attempt to keep the scale balanced by adding to the other side. Education, arts, athletics, family, travel, on we heap the good seeking balance and elusive peace.
I have been thinking of the peace and balance and my thoughts crossed over to my recent reading of… Continue