I was working with some P6 and P7 pupils on a storytelling training workshop and it was very interesting to see the difference in attitude between P6 and P7. The 'too cool to get excited by storytelling' atmosphere at the start could have stifled all creativity, but thankfully, didn't put me off. It was a bit difficult getting the audience participation going on the first story, but humour won out! By the time the second story had shocked the class and forced them to laugh at themselves, even… Continue

Hello fellow storytellers, the time has come - I've left my London job subtitling and committed myself fully to the road of story.
In January I go to Asia on a tour of India, Thailand, Laos, Vietnam, Cambodia, Phillipines, Indonesia, Myanmar, Nepal and Sri Lanka until November 2011.
I plan to collect stories, tell stories, create stories and send stories home via YouTube. I would really love to meet up with other storytellers in these countries…
Continue

Kay and Gerda were the best of friends. To get from one of their houses to the other, the children simply had to skip over the street and knock on the door. Every single day, they
played… 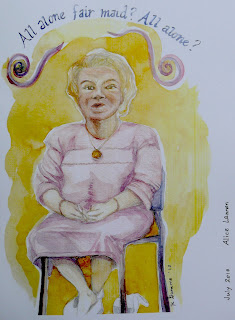 This past summer, the Storytellers of Canada-Conteurs du Canada held their 18th annual conference in St. John's, Newfoundland. As part of that conference, we wanted to feature one aspect of our intangible cultural… Continue

The materials of storytelling

Inviting you to read, comment and share. Just go into the Agora>categories (toolbar)>The materials of storytelling>scroll to the bottom.

Dear fellow tellers,
I accidentally started two discussion groups with my question yesterday, but I hope by addressing you through a blog post you can advise me.
I have been invited to tell stories to a beginning English class here in Germany (near Munich), third graders. I have some stories I normally would tell, but since the holidays are coming, I am looking for some easy stories, the kind one might tell to kindergartners or preschoolers, with…
Continue

It was something special!

The Heroes Day celebration was truly something special. Jamaicans in a live audience, connecting with the Jamaican Creole stories told, as only Jamaicans can ...and of course, the food!

But the highlight of the week for me was when one Jamaican admitted to me that she was moved to tears by my performance of the story of the hero Paul Bogle. What a compliment!

Here's hoping the rest of the year is just as good or better.

The world is telling a story....................
Your story and mine, scripted and ready, is playing out.
We are distinct and significant
Yet we are one of the whole, a story yet to be told.
As we create and tell our stories,
we delude ourselves, for a brief moment,
that
We are "gods"
- creative - indifferent to the world.
then we return, free (or is it trapped) to recite our lines
and live out our chosen scripts.

Good gum trees, we are busy. Check out our blog to see all our happenings! Love to tell stories with you all anytime.

Added by Storytelling Australia Victoria on November 7, 2010 at 5:30pm — No Comments 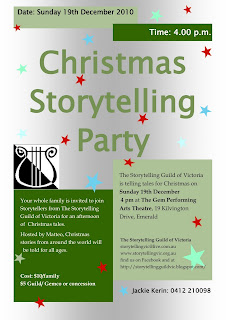 Added by Storytelling Australia Victoria on November 7, 2010 at 5:28pm — No Comments There was once a young woman. She stood, at the entrance gate of a garden, and the size of the gate was so high and wide that she could see no way to climb in, or walk round, for the garden was surrounded by a very high wall. Covering the wall was a thicket of dark thorns - sharp and needle pointed, and all facing towards her.
She had been told by her father that in order to start a new life she had to enter this garden, using a golden key. And this key was inside the…
Continue

WORDPLAY: Games that teach the skills of Storytelling #11

Game Objective: Have each person contribute to a plea for help

Description: The leader helps the group chose a familiar story from fairy tales, tall tales, literature, the Bible, history, etc. From that story the group chooses a main…