Interviewed On the Radio and Web Sunday Night 4/25


Hey all,
I am being interviewed on the radio tonight in Kentucky.
(U.S. Sunday 4/25)

9PM Eastern. Talking about storytelling & DaddyTeller.
One hour show. Host has already told me he wants
at least one story from me :-). I can do that.

You can also listen in on the web from anywhere.
(6PM Pacific/9PM Eastern)

On the Radio in Atlanta/Gainesville Georgia!

I will be inteviewed on a radio station in
Northern Georgia/Atlanta Georgia (U.S.) on
Friday, April 23. We're
set to start sometime between
5 and 515PM (Eastern) for the afternoon show.

You can listen in live on the
web at
http://www.wdun.com/
from where ever you are in the world,
just adjust for your time zone.

Do you need the secrets to more work as an artist?

If you already have more bookings than you can handle, stop reading now and accept my congratulations. That's not sarcasm: I know that a small sliver of storytellers do just fine.

If you *do* need more bookings, more gigs, more work- then let me ask you:

If you attended my marketing workshop in Vista (San Diego) on May 15-
.…

On the Radio Monday in North Carolina!

I have another live radio appearance on Monday!

I'll be talking about storytelling and the
DaddyTeller book. I think we're scheduled for 15 minutes.

Would You Do My Quick Survey About Marketing Workshop?

1. I've posted a new video about the upcoming marketing workshops in Arizona and California. I've already had one artist say that just this video has helped them think more about their own work. Come take a look at http://www.outsideinstorytelling.com It's in the big blue box right there at the start of the page.

2. We are looking at the future of these…

Hey southern California, I am coming your way.

Thanks to some great legwork/communications from California-based storyteller James Nelson-Lucas, we're able to bring the one-day "Outside In" marketing workshop to California on Saturday May 15, 2010. Wow!

More coming soon. For now, you can get details and registration information at http://www.outsideinstorytelling.com and click on the… 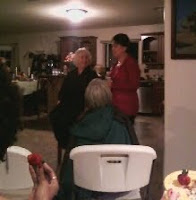 Storytelling events come in all shapes and sizes. This was a bit more home party.

We had a great time Saturday night at a storytelling house-concert held at the home of Dwight and Sandy Oglesby in Paradise Valley, Arizona, a northern suburb of Phoenix. (In the picture- Sandy is on the right standing next to Liz Warren.)

Sandy had announced the…

Build Your Success with a One-Day Marketing Intensive, Phoenix Arizona.

I am doing a live radio interview
talking about storytelling
and the DaddyTeller book
on Monday, March 8
at 7:05 in the morning.

You can listen live
"serving all of Orange County and
Northern New Jersey" on the
station at 1110(am).

They also stream live, so
you can hear it at
http://www.wtbq.com , too.

A couple of more radio shows on Wednesday the 27th, talking about storytelling, parenting, family and the DaddyTeller book.

Audio from Radio Interview: Storytelling for Our Children

Come listen in to a radio interview with the Storyteller.net director Sean Buvala as he talks about the role of the "dad influence" and the power of storytelling.

Interviewed by Phil Main of www.am920.ca in Ontario, Canada. Sean and Phil talk about storytelling in our families, talking to teenagers, the power of speaking a story as well as more… Continue

New DaddyTeller™ Training Video: Get Close to Your Kids

Just added another free training video to my list here at Ning. You can see it here.

http://www.daddyteller.com Bedtime Stories are a powerful way for Dads (Moms, too) to connect with their kids. Don't be afraid to sit close, put down the storybooks and tell a story to your kid. Yes, Dad, you can do this. You will grow closer to your… Continue

Synopsis:
Storyteller.net releases a new storytelling CD titled "Frog Kisser" with stories including "The Frog Princess" and seven other tales of enchantments. Especially for adults and teens, the CD is available now from Amazon.com.

Just posted two new videos for you. You can see them on this page: http://professionalstoryteller.ning.com/video

Your Storytelling Marketing: Oyster and Egg

If you are going to succeed in marketing, then you need to know the difference between oysters and eggs.

Do you know this Aesop fable?

"Once a dog was walking along a beach, daydreaming of eggs, his favorite food. As he walked along, he caught site of a small oyster and assumed that this round item, too, was an egg. He gobbled it up. Later that night, as he was troubled by stomach pain, he thought, "I deserve this pain for thinking that every round thing is an… Continue

DaddyTeller™: Be a Hero to Your Kids and Teach Them What's Really Important by Telling Them One Simple Story at a Time.

The Ebook will be available on 10/7/2009! Sign up now for our updates on the
DaddyTeller™ site to get your discount code for the launch day!

You are about to become a hero.

It’s time for you to… Continue